The Cahoon Chronicles. Memoir and Story 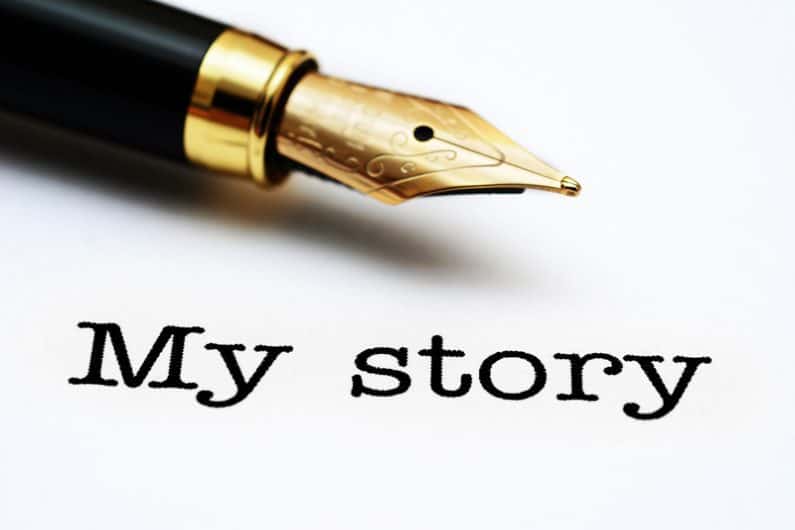 Memoirs are deceptive. It seems like such an easy thing to tell people about your life. Just start at the beginning, right?

No, don’t. Haven’t you ever been trapped in That conversation before? The one with the coworker or in-law or uncle? Or coworker uncle-in-law? Where they tell a story that has no beginning and no end and after it’s done you still don’t know what happened? In a memoir, it looks like this:

I was born to Mildred Smith-Jones and Norbert Upton Cahoon IV. Now there are two branches of the Cahoon family. One lived in the city even before the War Between the States, and they were upright folk who worked hard and minded their own business. We did not see much of them. But Daddy was of the upcountry Cahoons. He grew up in the upcountry part of the state in an old white house with magnolia trees and a big verandah. He kept deer head on the wall beside a plaque of him getting an award from the mayor for building a porch with the most room for taffeta.

And Momma wore very large hats that had been decorated with artificial fruit. She always had a big silver pitcher of martinis for the adults to the ready. The house is still standing, and is occupied by my great-great-niece Boo and her husband James Martin Sherman. Boo isn’t her real name, of course. She was called that because it was her young daughter Maisy’s name for the clear liquid Boo drank of an afternoon that came out of a flask that she hid in her linen closet.[1]

That book is not going to sell many copies, no matter how many upcountry Cahoons there are. And for the sake of the story, we had better hope that there are not many, because a 1060-page four-volume memoir is too long, unless you are Winston Churchill.

The narrator hasn’t even begun talking about their own life! You have stopped reading unless you are an upcountry Cahoon and are apprehensive about why you are not grouped with the hardworking Cahoons and want to know what the narrator is saying about your family.

If this memoir is just a little bit worse, you’ll be told this:

Daddy treasured that deer, and one day, I asked him why, and he turned to me and said, “Mildred, you must always remember where you came from. We upcountry Cahoons are not city Cahoons, and we don’t mind our own business and we may not work as hard, but we all know where we came from.” And Momma nodded, martini pitcher in her hand, and said, “We always have each other.”

This will make your reader hate you. Don’t do this to them.

If you want people to read your story without its being required reading on a syllabus, beginning at the beginning isn’t always the right beginning. And the more your memoir reads like the Cahoon Chronicles, the more compulsory the reading of it is, the more unhappy your readers will be. You must still tell a story, and that story has to interest people who do not know you.

But how do you begin, if you don’t begin at the beginning?

Darting. As I said, the main thing I wanted to learn when I first joined the troop was what a baboon’s social behavior, his social rank, his emotional life, has to do with what diseases he gets, especially stress-related diseases. Why are some bodies, and some psyches, more susceptible to such diseases than others? So you watch the animals like crazy, carefully document the whole soap opera. Then dart them with an anesthetic blowgun and find out how their bodies are working. Theoretically simple. Approach a baboon you typically walk up to twelve times a day while you’re doing behavioral observation, except this time, your walking stick turns out to be a blowgun and you zip a dart into him. The only problem is that you have to dart everyone at the same time of day, to control for daily fluctuation in blood hormones. And you can’t dart someone if he’s sick that day, has had a fight, an injury, mated—because those will throw off the normal values of the hormones. Finally, and here’s the real pisser, you can’t dart someone if he knows it’s coming. If I’m trying to see what stress hormone levels in the bloodstream are like under normal unstressed resting conditions, I have to get the baboons when they are quiet, unsuspecting.[2]

This is cool stuff even if it wasn’t written by a brilliant neuroendocrinologist who got a MacArthur Fellowship genius grant. That could have gone badly, with exhortations to study and a description of the career of one of his mentors. Dr. Sapolsky instead began with a description of the generations of the baboon troop and how to collect blood samples from them without getting them killed. He describes the darting of a baboon named Uriah, and in that anecdote, you learn more about Robert Sapolsky than you would have if he had begun at his earliest memory and talked about every second until that moment, in adulthood, that he was trying to hit baboons with tranquilizer darts. I’m not going to spoil it for you. Buy the book.

You can start early in the book with your mother if you’re John Cleese:

Dad once described to me how, during the First World War, he had witnessed a wounded soldier lying in a trench and crying out for his mother. “Why on earth would he cry for her?” I wondered. When, over the years, I began to hear friends tell me that their mother was their best friend, someone with whom they routinely discussed their daily life, and to whom they looked for emotional support, I simply thought, “How wonderful that must be …[3] This next passage had me laughing so loud in a post office line that the man ahead of me turned to me and said that that the sound of my laughing had made his day.

Actually, “difficult” is not quite fair. There was only one thing that she wanted. Just one. But that one thing was her own way. And if she didn’t get it, that upset her. And she was prettily easily upset; in fact I think it’s fair to say she had a real facility for it; and when something did upset her—and there was a very limited supply of things that, in the final analysis, didn’t—she would throw a tantrum, or several tantra, of such inconceivable volume and activity that there must have been times when Dad yearned for the relative tranquillity of the trenches in France.[4]

What I haven’t decided is whether it’s even funnier because I know what John Cleese sounds like. Of course it’s funny. But he’s also good. “In a nutshell,” he says, “Mother experienced the cosmos as a vast, limitless booby trap.” It didn’t take that many words for us to know her, and consequently, him, better. She yelled a lot and was mean and difficult and that affected me and I was jealous of other people who liked their mothers doesn’t have the same power.

In order to start at the beginning beginning, it helps to write like Frank McCourt:

People everywhere brag and whimper about the woes of their early years, but nothing can compare with the Irish version: the poverty; the shiftless loquacious alcoholic father; the pious defeated mother moaning by the fire; pompous priests; bullying schoolmasters; the English and the terrible things they did to us for eight hundred long years.

What makes this successful is the general to the tangible. They were wet. You leave off that sentence, and the rest of the passage becomes a cliche.

In other words, a successful memoir is a good story first. But because it’s a true story about an actual life, a memoir is a complicated beast. Not only does it need to be well written, but it’s helpful to know why you are writing it in the first place. Are you preserving family history? Is your life really interesting? These are common reasons to write a memoir. But what if you are also settling old scores? What if you did things that you weren’t proud of? How do you live with yourself? Often, in that case, you write a memoir that isn’t quite true. What if you are describing horrific abuse? What if you are making amends? What if you are trying to tell people how to survive? The why of the memoir is you, deciding who your audience is. And if you learn how to tell the story, it will be one that even the least hardworking Cahoon will want to read.

[1] I so totally made this up. This is a work of fiction. As the canned but true disclaimer goes: names, characters, businesses, places, events, locales, and incidents are either the products of the author’s imagination or used in a fictitious manner. Any resemblance to actual persons, living or dead, or actual events is purely coincidental. I have never, will never, hold a client’s work up as an example of what not to do. Those of you who have hired editors are brave people, and the last thing you deserve is to worry about having your unedited work made public this way.