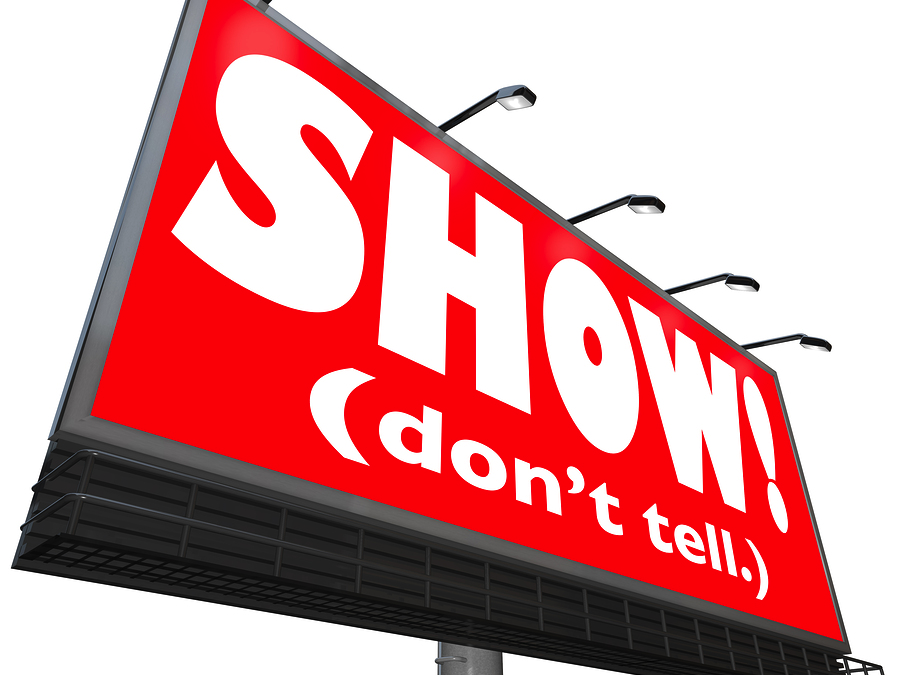 One of the most important tenets of good writing you’ll ever employ is the “Show, don’t tell” rule. Basically put, writing has more power, creates more interest, and better engages readers when you let them draw their own conclusions. Showing allows the reader to experience the story through what they observe including action, dialogue, and the various characters’ behavior, rather than through the author simply summarizing or interpreting for the reader.

Contrary to what you might think, younger readers generally don’t need more “telling” just because they are younger and less experienced. Kids are very good at picking up on physical cues/body language and facial expressions and at reading between the lines. Also, giving young people the opportunity to infer what characters are thinking and feeling based on what they say and do gives children the chance to learn more about human behavior. Showing will also help you avoid didactically delivering a lesson to the reader-a big no-no in traditionally published children’s books.

In an illustrated book such as a picture book or graphic novel, the illustrations have added power to provide even more information about what is going on, to show the emotions the characters are feeling, as well as what the characters and settings look like, and they can reduce the amount of telling the writer needs to do.

So how do we show, not tell? Let’s look at some examples.

Dialogue is a great tool, as are physical actions. E.g.:

Sally loved the beautiful flowers. She was bursting with excitement.

The writer tells us Sally is bursting with excitement. She might show us the same thing with:

Sally held the delicate pink roses tightly to her chest. “Yippee!” she squealed as she danced around the room.

You’ll see the difference. It provides exactly the same information but shows, rather than tells the reader what Sally is feeling by the way she acts and her dialogue. It also shows us the flowers and allows us to judge whether they are beautiful. (Beautiful is one of the very weakest words writers can use, in my opinion.) Showing makes for much more interesting reading.

Sally wore a blue dress, and her hair was black. (Telling)

Sally stroked the sky blue satin of her dress and twisted her jet-black ponytail around her finger. (Showing.)

Sally told her friend that Sam asked her to the dance. Jenny said she was happy for her.

“Sam just asked me to the dance,” said Sally.
“I’m so excited for you!” said Jenny, smiling warmly.

Here’s an example of an unnecessary dialogue tags and telling:

“Sam just asked me to the dance!” declared Sally in a proud tone.

“Sam just asked me to the dance!” Sally held the corsage high like a trophy.

As you can see in this example, the dialogue tag is even made redundant because the action confirms the identity of the speaker.

Showing is also a handy way to solve many POV (Point of View) and voice issues. Imagine a scene with our two characters, Sally and Jenny, and that Sally is the viewpoint character-that is, the story is coming through her limited third person Point of View. Sally’s friend Jenny is feeling very happy, but she is also nervous about something.

Sally was happy to see Jenny running toward her. “I think Toby is going to ask me to the dance,” said Jenny. She was feeling very nervous.

In this example, I first establish that we are in Sally’s limited third person viewpoint: Sally was happy to see Jenny running toward her. Then the POV shifts awkwardly-also known as a head-hop-because we enter Jenny’s POV: She was feeling very nervous.

If I shows how Jenny feels, rather than telling you, we don’t have an unnecessary and clunky shift in POV.

“I think Toby is going to ask me to the dance,” said Jenny. She grinned, but her hands were shaking.

Also, as you aim to show, start by mostly avoiding adverbs, especially in dialogue tags:

Stephen King said it best in On Writing: “The road to hell is paved with adverbs.”

Showing works well in action scenes, but telling can help flesh out more reflective scenes. Showing is great for engaging the reader; telling can be useful to quickly convey information. If a story were all showing, then it might read almost as if the reader were looking through a panning camera lens, and that might be a little tedious and limiting for both writer and reader alike. Too much showing can also inflate your total word count, so remember to cut back on unnecessary detail, dialogue, and descriptions. In actuality, a well-written book for any age combines showing and telling techniques, so “show” liberally, but aim for balance overall.