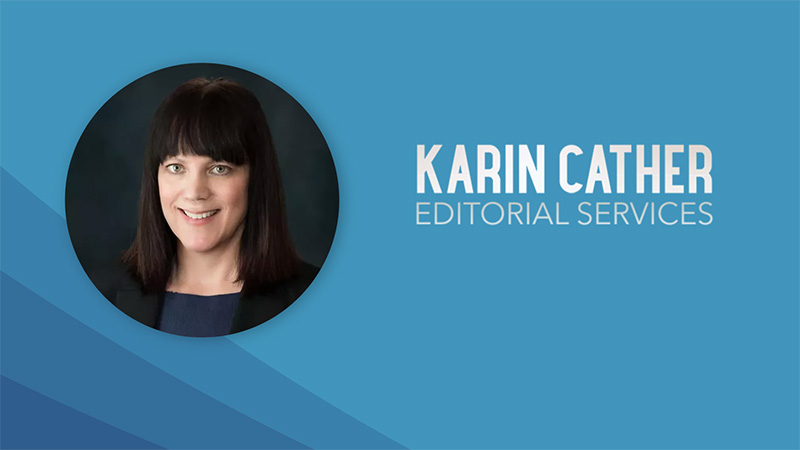 KARIN CATHER is a book editor and former trial lawyer in criminal law and child welfare. She offers expert editing to writers of crime fiction, thrillers, and detective novels, and science fiction, fantasy, and dystopian fiction. She also ghostwrites books in the same genres. Her unique martial arts training assists her in gauging the realism of fight scenes, including with guns, blunt instruments, and knives. She hates mornings. She is fluent in customer service phone tree, feels that coffee is a necessity in life, and, given that she loves thunderstorms, wonders how she somehow managed to find herself living in Arizona.

I have been an editor since 2015. I have been with Book Editing Associates since May 2016.

I chose editing (and ghostwriting) as my second career because I wanted to do something I love and I had begun to find the conflict inherent in the practice of law exhausting at the same time that my child’s special needs required increasing involvement. I made the decision to change careers in fall 2013, but first I got training and an editing certificate from UC Berkeley Extension, joined editing associations, and learned from experienced colleagues before opening my virtual doors in early 2015.

I wish I’d made the switch sooner.

I am. First, there’s ghostwriting.

I have also written multiple academic journal articles and technical articles and two book chapters about prosecution, and I also coauthored a book about contracts between authors and editors.

My police procedural/science fiction crossover A Million Monkeys is on the virtual desk of an editor and I’m working on the sequel, Sick Puppies.

Research. Quite frankly, the recurring problem I see is not with spelling, grammar, usage, and punctuation, it’s with factual errors. Big ones. You can’t say “it’s just a story,” because you’ll insult your readers. If you’re going to depart from a known fact, you should know you’re doing it, and you’d better be doing it for a good reason and prepare for the blowback in book reviews.

Common mistakes involve how cases are investigated, the climate and gravity on a planet that is orbiting a particular class of star, or the foreseeable emotional reaction of a character to a given event.

A big one is when the protagonist is knocked out, wakes up the next morning, and escapes in time to save the scientist in Zurich; that’s a serious brain injury and many people are caring for survivors of TBI or have experienced it themselves, so the audience isn’t going to buy it unless the protagonist is a superhero. I can help you find a way to incapacitate your character and render them unconscious without leaving them grievously injured. Another is the idea that all prosecutors hate all defense attorneys when it’s really just that one lawyer in each local bar who’s a problem for everyone.

Once you do your homework, your book will be more factually solid and you’ll have fewer plot holes, if any. And you may find that your story is better.

Many authors struggle with dialogue. Their grizzled, hardboiled homicide detectives sound like a high school vice principal talking to Mr. Rogers, no one uses contractions in their speech, or the eight-year-old speaks like a Supreme Court justice. I love helping rewrite dialogue. And, as you can imagine, fact checking is one of my favorite things to do too, and if an author doesn’t want to or doesn’t know how, I’m happy to do it for them.

What’s challenging is when an author submits a book for editing that has a lot of promise but then they don’t want the editor to make any changes. It’s a leap of faith to pay a professional to help you with something you’ve worked so hard on, but the whole point of hiring one is to let them help you.

I think that a unique style can be very successful commercially, and an editor needs to respect an author’s voice. One of the reasons I tell my clients to hurl the Elements of Style into the nearest shredder is that it forces a uniformity in writing that should not be there and sucks all the air out of writing. So there’s a lot of room for creativity and unique perspectives and an editor’s job is to dig the house out of the snow, not knock the house over and build their own. While sentences might need to be tightened up, dialogue tags removed, paragraphs moved from point A to point B so the reader is better oriented, the editor should make the book be more itself and leave as few stylistic footprints as possible.

But your audience needs to want to read your book, period. So if your tone is mocking and you’re at a puppy’s funeral, for instance, your narrator had better be a terrible person. You can write in all lowercase if you want to, but that’s a huge hurdle and you’d better be E.E. Cummings’s clone.

Right now the best science fiction continues to do what it has always done, which is to take contemporary social issues and examine them in a different world. There is a philosophical underpinning to the plot, but the characters aren’t cardboard. Of course, dystopian fiction could basically write itself right now.

Police procedurals and crime thrillers continue to be written in series form, so it’s important that your protagonist have the capacity for change and development. A lot of the best of these books have dark humor, so you can’t go wrong with that if it’s used properly.

Clarify the author’s voice, help the story move clearly from point A to point B so that the reader is drawn along by the story and is not left in the middle wondering how they got there, and flag any plot holes or inconsistencies or discontinuities. If there are any loose ends, I point them out to the author. I also spot factual errors.

Understand, even the most realistic books have issues like character name changes, dogs that are German shepherds on page 17 and golden retrievers on page 75, a day that starts at noon on Thursday and the characters wake up in the same city the next morning on a Saturday, and similar. This is not by any means author sloppiness, it’s that you’re working on chapter 5 weeks or months after you’ve written chapter 2.

I also want to point out clichés and undesirable tropes. For example, the author should really make sure their book passes the Bechdel test. That is, two named female characters should talk about something other than a man.

I’m writing a police procedural/science fiction novel, I practice Krav Maga (I have a black belt), and I read a lot. I also binge-watch terrible medical soap operas. I miss the show Code Black. Why they canceled it and not Grey’s Anatomy is beyond me. I digress. My editorial assistants are a great big mutt named Frederick and a tyrannical cat named Joey. And I spend time with my son, who lives nearby.

I was an AstraZeneca vaccine study participant.

One thing that authors worry about is the editor who silently judges their grammar. A professional editor does not do that. In fact, I’m coin operated, so if someone wants me to evaluate their writing, they have to sign my service agreement, so I’m not even judging your grammar on social media. I see my role as that of a teacher. I point out consistent issues with your book so that you won’t make the same mistakes in your next one.

Speaking of which, I can make up to 65 pages of comments in the margins and make many changes. Please do not be discouraged. You should not give up on your book; you worked too hard for that. Take the changes to heart. It is very common for even the best books to need editorial involvement. I know that when I am finished with my own novel, I can expect some red ink.