Elements of Submission by Karissa Knight 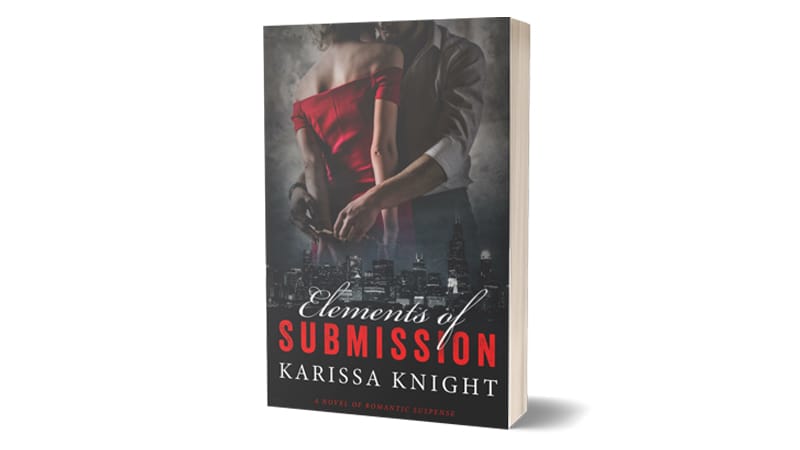 When a powerful young billionaire hires Chicago’s hottest legal star, she must decide whether he’s a killer or the man to unlock her most private fantasies.

Wilhelmina Green is the lawyer of choice for sexual predators and murderers. Her latest victory, the acquittal of a U.S. senator, has made Mina a media sensation. Escaping the attention, she secretly takes her next tombstoning dive into Australian waters. The risk of a solo jump at dawn serves as her punishment and atonement for releasing guilty men into the world.

CEO Jonathon Thomas Heun, suspected of a brutal murder, hires Mina to represent him. His seductive world of wealth and power soon draws her in as they work to uncover evidence of Jonathon’s innocence. Mina senses he’s keeping part of himself closed off from the world. And from her.

Dark fantasies of fear, pain and passion haunt Mina’s dreams and leave her breathless. No man has ever seemed capable of having her—possessing her—in this way. Until Jonathon.

Is he a killer? Or the one she’s been waiting for?

“My husband called it the Franken-book. When I reached out to Stacey Donovan, I told her that this manuscript had been through 26 revisions. It may have been an exaggeration, but not by much. Needless to say, ten years of toying with it had made me question not only the strength of the plot and the characters’ interactions, but also my writing.

Stacey took on the project and helped me turn a monster into a beautiful, intricate romantic suspense novel. She is a masterful editor familiar with current genre tropes and the trends in publishing. Without Stacey’s artful sculpting and gentle paint brush strokes, Elements of Submission would still be a file hidden inside my computer. “

The Birth of a Series

Q: At what point did you realize you wanted to write a series? Was it an “aha” moment? Or had you planned the series before you began to write Elements of Submission?

A: I don’t need to tell you that readers and viewers can’t get enough of any good series. In fact, I can’t remember the last time I watched a stand-alone movie. It doesn’t matter what genre you read or watch—mystery, romance, thriller—these days the package is the characters and their premise. Episodic stories capture our short attention spans. And we can return to those characters we love to follow, again and again. For me, creating a series was the natural evolution of my protagonists’ relationship.

The concept for Elements of Submission came about when I first dabbled with writing about ten years ago. I always knew it was a series because I envisioned my characters Wilhelmina Green and Jonathon Thomas Heun living beyond the first book. I wanted to know their intimate lives and journey with them. As a writer, you become close friends with your protagonists. With all their traits, flaws, and quirks, they aren’t just fictional people in your mind. They have jobs and friends. You laugh with them and cry with them. The tragedies that befall them also devastate you. Elements of Submission was just the beginning of my characters’ undying relationship that will come to light in the Elements of Power series.

Q: Once you decided that this was the first book, was it easier or more difficult to conceive of its ending?

A: Believe it or not, the ending of Elements of Submission was my original concept for the book! I wanted to write a character who was in a unique situation. What self-sacrifices she would make? Was she hard on herself? Was she intelligent? What personal journey would she travel and what demons would she fight in order to get what she wanted? My character would want to take the relationship to the next level. Intrigued by the premise of her journey, I began to craft this incredible woman’s story.

I once heard the advice to never write to the ending. In other words, don’t come up with an ending and be so fixated on making that happen that you forget to make the rest of your story as compelling as possible. I’m the type of person who has to break a few bones (usually my own) before getting my process right.

At the beginning of my writing career I struggled to find my process. I kept trying, published Best Kept Secrets with Crooked Lane Books and eventually returned to my dusty Elements manuscript. It took twenty-some drafts and ten years to publish Elements of Submission. My efforts revealed learning new habits now embedded in my process. I always need to know the characters and the ending before I begin to write. I know my premise, and I know the concepts I want to explore with the series. I need to keep up the momentum that began in book one. And most importantly, I must stick to those ideas and concepts to help my characters evolve.

Q: How did you decide on the series title? Once you had the series concept in mind, how many books did you envision?

A: At first, I named my manuscript Elements of Engagement based on a legal contract signed between my characters, a lawyer and her client. Elements of Submission, the current title, came months before publishing the book and with it the concept for the romantic suspense series began to evolve.

The romantic element of my series premise has to do with power dynamics in relationships We fall into our status because of our past, because it’s our nature, and because of psychological factors that we may not be aware of. This push and pull of power is something that fascinates me. Because I love learning why we humans behave the way we do, I like to explore psychological concepts in my writing. I hope to give readers something to think about.

The suspense element is a crime that must be solved. Mina is a high profile Chicago lawyer, so she will be faced with new criminal cases every day. She hasn’t yet told me what she’ll face in book three. Right now, I envision only three books in the series. As you’re reading this, I’m finishing the first draft of book two, Elements of Dominance. That book will be available in 2022. Book three is still a twinkle in my eye. I don’t yet see a fourth book in the series, but Mina and Jonathon may have other plans. I’m willing to take the Elements of Power series as far as it can go. As long as the story stays interesting. And as long as Wilhelmina Green has a story to tell.