One of the problems I see in many novels I edit is that they feel more like scripts than novels. This is most often the case for plot-driven stories. The sense I get is that the writer is actually envisioning a movie while writing the novel. (Perhaps even picturing particular actors for the roles!)

Film and literature are two different media. They each have their strengths and weaknesses. When you choose the novel as your medium, it behooves you to make the most of its particular strengths. If you write a novel as though it is a script, you will be missing out on both what makes a film work and on what makes a novel work.

What’s the difference between a film and a novel?

A movie production relies very heavily on visuals to do the work of telling the story. In fact, entire films have been made with no dialogue at all. (All Is Lost, starring Robert Redford-and only Robert Redford-provides no backstory, no dialogue, no voiceover. Just visuals.)

A script lays out the visual elements of its scenes in a straightforward manner. [John, dressed in a sharp-looking tuxedo, walks into the dining room, pulls a bottle of scotch out of a cabinet, etc.] These directions are not meant for the audience, but for the director, the set designer, the costume designer, etc. These production people take care of the visual aspect of the storytelling experience-they just need to have some idea what the writer has in mind. The audience follows the thread of the story by listening in on the characters as they talk to each other and by seeing where the camera takes them. The experience is enhanced through lighting, music, camera angles, etc., all of which manipulate the viewer’s emotions.

A novel, in contrast, relies entirely on narration-that inner monologue that shows a character’s thought process. If the narrator has personality, depth, wit, insight, then the novel will be engaging. But when a novel is written to feel like a script through overreliance on “set directions” (descriptions of the weather, the furniture, what people are wearing, how people look) and dialogue, the result can be a very shallow-feeling story.

A novel has no visuals. Images are created in the reader’s imagination through the author’s careful choices of details. The art of description, especially in a plot-driven novel, involves choosing enough details to help the reader picture the scene but not so many that the reader’s brain feels overloaded with description (obviously literary novels are in a different category). The skillful writer will most often choose telling details, ones that are of importance to the story and not merely descriptive.

Novels primarily work their magic through the power of the written word to engage the reader in a drama. Since we readers cannot actually see what is going on, the power comes from character thoughts and character development. These two things are essential to novels, even to plot-driven ones.

What makes it apparent that a writer is envisioning a film more than a novel?

When I write on a manuscript, “Avoid stage directions,” it’s because too many sentences, perhaps entire scenes, feel like they exist mainly just to get the characters from Point A to Point B to Point C. “John grabbed his briefcase, straightened his jacket, and walked toward the stairs. With a toss of his head, he sauntered out of the room. Leslie looked down at the floor and then got up to walk over to get her coat from the coatrack.” The characters seem one-dimensional, almost like action-heroes being moved around on a little stage.

It can be a challenge to resist the temptation to provide lots of stage directions in a plot-driven novel. But it must be done. As your reread your prose, make a concerted effort to take out unnecessary physical actions and bland setting descriptions. Certainly don’t include characters scratching their noses or looking down at the floor or out the window-unless, of course, those actions are essential to what happens next (the character notices an important note lying on the floor; or sees the bad guy scurrying down the street beneath the window). And while avoiding stage directions, be sure to make your characters interesting, witty, charming, quirky, etc., so that the focus is more on the characters themselves than on their physical actions.

Another thing that can make a novel feel like a script are long passages of pure dialogue that lack narration from the point-of-view of the character whose head we are supposed to be in. Beware of getting so caught up in the back-and-forth of the dialogue that you forget the character who should be reacting internally to what is being said. Does the character believe what she is hearing? Does she have any sort of emotional reaction? Is there background information that would show why the conversation is meaningful to her? Including this narration is how you make use of the “strength” of the novel as a medium for telling a story.

If you are envisioning a movie, then write a script. If you want to be a novelist, focus on lively narration and characters and maintain a good balance among narration, action, and dialogue in every chapter. Appreciate that the novel is a particular type of storytelling medium. Your goal is to use it to maximum effectiveness. 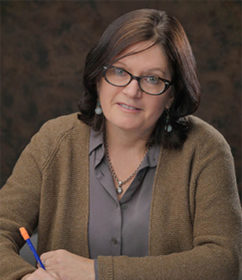 Carrie Cantor
CARLY CANTOR is a publishing industry veteran who has worked in-house at a New York publisher as an acquisitions editor and is a two-time published author.