In The Inner Guru: Dreams Reveal Your Future, author John Desautels expands on his experience with dreams, with unique insights provided by examples from his more than forty years of dream study. This is a followup to his first book, a memoir, The Man Who Sees Tomorrow in His Dreams. In this new book, he includes exercises to help readers experience the power of dreams in his or her own life.

Many of the pieces in the book developed from his blog, which he worked over into a cohesive whole with help from editor Marie Valentine. Marie recently asked him a few questions about the project and his other work.

Marie: John, what triggered your interest in dream study so many years ago?

JD: In my first job out of graduate school, I was unhappy with my job, coworkers, and the city where I lived. I began searching for meaning, for my purpose in life. By chance, I discovered that study groups had formed around the US to follow a program developed through the trance readings of Edgar Cayce. It was in response to questions to Cayce from a group of people who were seeking spiritually. His responses resulted in two red volumes called A Search for God. These books were read in the study group meetings, along with a discussion period concerning dreams. Cayce strongly recommended that people pay attention to their dreams, and this was the start of my own work with dreams.

I decided to share my experience with dreams through books, a website, and a blog because of the tremendous misery I saw daily among family, friends, acquaintances, and strangers that could easily have been avoided if these people were being guided daily through their dreams. The answers people so often seek for their problems are there within themselves, if they would only look. And dreams provide a way of looking and receiving those answers.

MV: Why are individuals the best interpreters of their own dreams? Are dream dictionaries wrong?

Symbols in dreams are chosen by the subconscious of the dreamer. They are not random and there is no standard meaning. The symbol is chosen by the subconscious based on its meaning to the dreamer as it builds the story or message it wants to deliver in the dream. A symbol such as a car, plant, or animal may elicit certain associations for one person and completely different associations for another person based on their histories with the symbols. As an example, a lion may represent power to one person and fear to another. Some symbols do share a commonality among dreamers, but even here there can be an aspect of the symbol that is unique to the individual.

Therefore, a dream cannot be interpreted simply by looking up the meanings for symbols in a dream dictionary. The meanings listed may give someone an ideal about the theme of the dream, but for the actual meaning some digging into personal associations is required. These unique personal associations reveal why that particular symbol was chosen and aid in the interpretation of the dream. Also, the dream often weaves a story, and a story cannot be understood just by knowing the elements in the story. The key to understanding a story is the meaning of relationships and interactions between the elements. Dream dictionaries cannot provide that.

MV: Many of your examples of premonitory dreams are simple encounters that were foreshadowed by dreams. Can you share a dramatic example of a premonition through a dream?

I think great care is required here. Of course, many people would be interested in a prophet who can foretell the future as it relates to global events. People still read about Nostradamus and his prophecies, and movies and TV programs that focus on his prophecies have been produced. Edgar Cayce is someone who is considered a modern prophet, and popular books titled Edgar Cayce on prophecy have been published. However, an interesting fact is that Edgar Cayce was really not a prophet in the sense of a Nostradamus. According to Contemporary Cayce by Kevin J. Todeschi and Henry Reed, less than twenty of Cayce’s 14,306 readings (less than .14 percent) were about possible future Earth changes. If I apply the .14 percentage to dreams, assuming about 1,000 recorded dreams per year, that means one or two dreams a year may relate to future Earth changes. And this is what I have found.

I do not claim to be a prophet, and my first book makes that clear. However, I do claim that I have had thousands of dreams of my future, from one day ahead to months and even years. This is why the subtitle of The Inner Guru is Dreams Reveal Your Future, with Your emphasized. I believe this is what is really important. It might be dramatic to dream of an earthquake that actually occurs, but unless it affects the area where you live, it probably means little to you.

A good example concerning climate that is well documented is my dream about extreme, record rainfall and flooding in South Carolina that occurred in October of 2015. President Obama declared a state of emergency for South Carolina as many saw amounts of rain never before recorded. I dreamed about this event in detail, with South Carolina named, in a dream on April 22, 2015.

MV: Can you discuss your author platform as self-publisher? Do you have tips for writers who decide to go this route?

I find that being a self-published author is much like running a small business. You are the producer of the product, but you are also the administrator, marketer, salesman, and accountant. You have to find your own audience for your book; there is no shelf space in bookstores or marketing campaign from a publisher to assist you. And I believe that many people still believe your work is inferior in some way or it would have been published by a reputable publisher.

Before self-publishing, I would recommend to someone that they clearly identify their audience and have a detailed plan for reaching that audience. Some marketing firms offer programs to self-published authors, but I found them to be expensive. Unless you have written a book that is likely to enjoy wide distribution, you probably will have to pursue other avenues such as social networking. 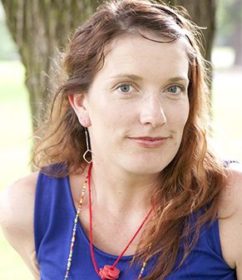